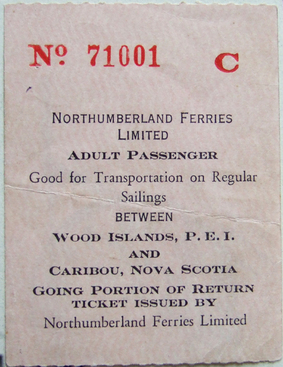 The first rates for the wood islands ferry was a $3.00 return fare for automobiles and .65c return for passengers.  The rate for trucks were $4.50 return if under 20 feet and .25c per additional foot.

The SS Prince Edward Island crossed between Borden and Cape Tormentine from 1917 until 1968. She was a twin screw steamer cast in heavy steel and capable of 7000 horsepower. SSPEI was 300 feet long and 52 feet wide. During the Second World War in 1942 the SSPEI was almost torpedoed by a German U-boat on a trip back from a Quebec refit, but made it home saftely. 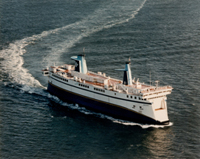 The MV Abegweit went into service between Borden and Cape Tormentine in December, 1982. She was 122.38 metres long and had a passenger capacity of 900. The MV Abegweit was named after her predecessor which was officially renamed Abby. She took her last officially sail May 31, 1997, the same day the Confederation Bridge opened.