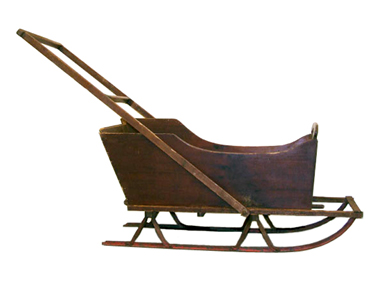 To See A large Photo Please Click On The Image

History of the Artefact:

The earliest known production date of this Hand Sled is 1883 built by a man named George Gard born in 1857 in Mill River, Prince Edward Island. The bottom part of the sled was purchased separately and because of safety concerns for his son George modified the sled, adding a wooden box top, removing the steering bar and installing a wooden handle brace in the center for pulling or pushing the sleigh.

As a young man George worked in Port Hill Shipyards along side his father and grandfather who passed down to him their basic carpentry skills. George eventually left the Island for New Jersey, USA where he further expanded his knowledge of drafting and carpentry and later returned home as a master builder. He later went on to built the first of two homes for himself and his wife on Prince William Street in Alberton, P.E.I.

With the slogan "measure twice, cut once," George Gard's craftsmanship earned him a wonderful reputation and his expertise was highly sought after in Western P.E.I.  George also trained many carpenters in the area and his many projects can still be seen, especially in the Alberton area.