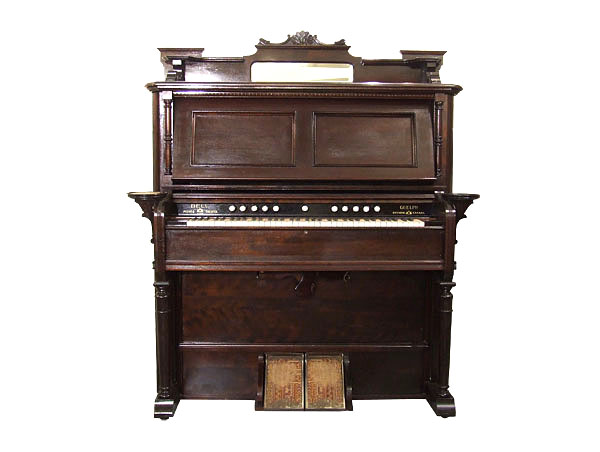 This upright, walnut Reed Organ was manufactured by the Bell Piano and Organ Company of Guelph Ontario. It was purchased circa 1913 by Howard and Charlotte Adams for their daughter Vera Adams, when she was a young girl. When Vera married Thomas Silliker they continued to live with her parents and the organ didn't have to be moved. Thomas also played the organ and especially liked to play Scottish music, such as "Sterling Castle" and "Road to the Isles". The organ was kept in the parlour but was sometime moved to other rooms in the house for parties. Vera's granddaughter Carol (Hudson) Schroeder started taking music lessons from her great Aunt, Mrs Ned (Lena) MacDougall in O'Leary, PEI. Vera decided to give her organ to Carol, and it was placed in her home in Cascumpec, PEI, until Carol decided to donate it to the Alberton Museum so that it could be enjoyed by all the visitors.

The Bell Piano and Organ Co. Instrument-manufacturing firm was established in 1864 in Guelph, Canada West (Ontario) by the brothers William and Robert Bell. With a staff of three, it produced 25 four-legged 'Diploma' melodeons in its first year. William Bell assumed management in 1865 and, as W. Bell and Co, opened a factory on Market Square in 1871. By 1881 nearly 200 employees produced annually over 1200 melodeons and reed organs, some of which were exported as far as Australia.

In 1884 (by which time the company claimed to have produced 26,000 instruments) Bell formed a partnership with his son W.J. Bell (1863-1925), Mrs. W.B. Kennedy, and A.W. Alexander. The younger Bell sold the firm to an English syndicate in 1888, at which time the name was changed to the Bell Organ and Piano Co, Ltd, and the manufacture of pianos was begun.

The company's production reached 600 reed organs and 200 pianos per month. The first grand pianos were built in 1901. Bell pianos were exported extensively, and some of the handsomer models were sent to the palaces of Queen Victoria, Queen Frederica, the kings of Italy and Spain, and a Turkish sultan.

The instruments also enjoyed success in trade exhibitions and competitions. When piano sales out-stripped organ sales and seemed likely to continue doing so, the company in 1907 changed its name to the Bell Piano and Organ Co, Ltd. Agencies were established across Canada (one of which, in Toronto, became in 1913 a separate organization - the Bell Music and Piano Co - and also sold records, phonographs, and sheet music). A trade magazine was published in the years before 1913. By 1920 the company had begun to produce player pianos, electric reproducing pianos, phonographs, piano benches, radio tables, and cabinets.

Over 170,000 pianos and organs had been built by 1928, when the company was sold to a syndicate headed by John S. Dowling of Brantford, Ont. The manufacture of organs was discontinued and the company was renamed Bell Pianos Ltd.