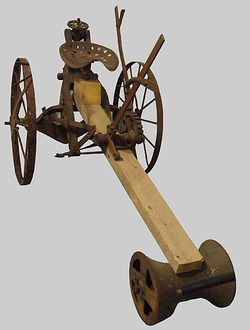 To See A Large Photo Please Click On The Image.

This Potato Digger, c. 1890, also known as a rooter digger, was used by local O'Leary  farms on PEI to harvest their potato crops.

This style of potato digger is possibly the oldest form, and is a simple machine resembling the potato hiller or horse hoe. The diggers "V" shaped shear ripped apart the rows (or drill) of dirt on the field exposing the potatoes that were ready to be harvested.

Even though the digger exposed the potatoes to be picked up, there was much work by hand required to collect all the potatoes after the digger passed through. Though it may be one of the oldest types, it certainly wasn't the most efficient. Potatoes would still have been partially uncovered and collected after the rooter digger had passed.

This digger would originally have been horse-drawn with the operator sitting on a seat above the wheels, but was  converted to be used by a tractor in later years. Many farm implements were converted for tractor use as their popularity increased on the Island.