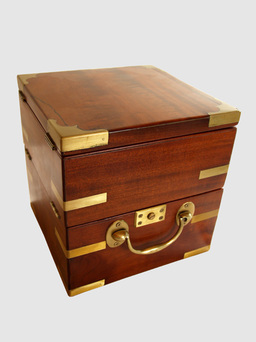 John Campbell was listed as a chronometer and nautical instrument maker at 17 Warren Street in Liverpool from 1845 - 1855.

The chronometer was used by Captain James Mustard of Cardigan Head, PEI who sailed vessels built in Cardigan.  It was refurbished by his grand nephew, John Mustard who gave permission to show it at Cardigan museum.

A timepiece intended to remain accurate while subjected to the motions of a ship at sea and through extreme changes in environment, especially temperature, is called a chronometer.

A Chronometer is a navigational tool used on training vessels to accurately measure the time of a known fixed location in order to determine the ships longitude.  The angle between the sun and the horizon (or if taking a reading by night the angle of the stars above the horizon) determines the latitude - a measurement taken by a sextant another navigational tool, but longitude is a more difficult measurement

To determine the longitude the navigator needs to know the time difference between where they are now and some other fixed point.  In an hour the earth will rotate 15⁰ (360⁰ every 24 hours) so if the time difference between you and a fixed point is 2 hours then you know that you are 30⁰ east or west of that point.   In 1884 Greenwich, England became the official Meridian line for all points around the globe and the GTM (Greenwich Mean Time) because the official time of the entire world.

Knowing the Latitude and Longitude the navigator then goes to his nautical charts and using his parallel ruler can then pin point his exact location.