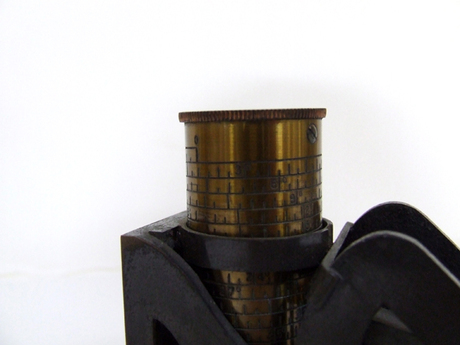 Otherwise known as an Artillery Range Finder this tool would be set on a large gun.  There is a leveling window on the top and a golden dial you could turn which would help determine the distance that the gun would fire according to its tilt.

Watkin clinometer by J Hicks, London. This instrument was used for measuring and laying out angles. The sensitive bubble level is held between pivots and connected to a lever which is held against the underside of the micrometer drum by a spring.  The bronze frame has two surfaces at right angles enabling any slope between 0 and 90 degrees to be measured,  between 45 and 90 being accomplished using the upright face and subtracting the angle read from 90 degrees. With it on the surface to be measured, the micrometer drum is rotated to bring the bubble to the centre of the tube. The angle is then read from the drum against the index mark on the collar. It is divided to five minutes of arc.  Probably late 19th century. At that time Watkin clinometers were used by the military for checking the elevation of gun barrels.