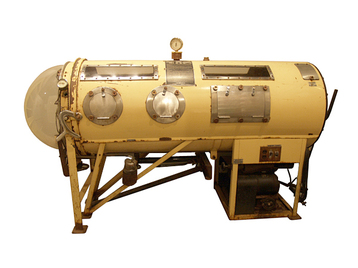 An iron lung works by raising and lowering the air pressure inside the chamber. When the pressure is low, the patient’s lungs breathe in and when it’s raised they breathe out. The first iron lung was constructed in 1928.

The Emerson Iron Lung was developed in 1931 by the American inventor, John Haven Emerson and because it was lighter, quieter, simpler, more reliable and affordable than other models it soon became the standard in hospitals throughout US and Canada. During the polio epidemics of 1940s and ‘50s, entire hospital wards were filled with people in machines like this one.

No device is more associated with polio than the tank respirator, better known as the iron lung. Physicians who treated people in the acute, early stage of polio saw that many patients were unable to breathe when the virus’s action paralyzed muscle groups in the chest. Death was frequent at this stage, but those who survived usually recovered much or almost all of their former strength.

Inventor John Emerson had refined the Drinker’s Iron Lung and cut the cost nearly in half. Inside the tank respirator, the patient lay on a bed (sometimes called a “cookie tray”) that could slide in and out of the cylinder as needed. The side of the tank had portal windows so attendants could reach in and adjust limbs, sheets, or hot packs.

NMAH /Polio: The Iron Lung and Other Equipment