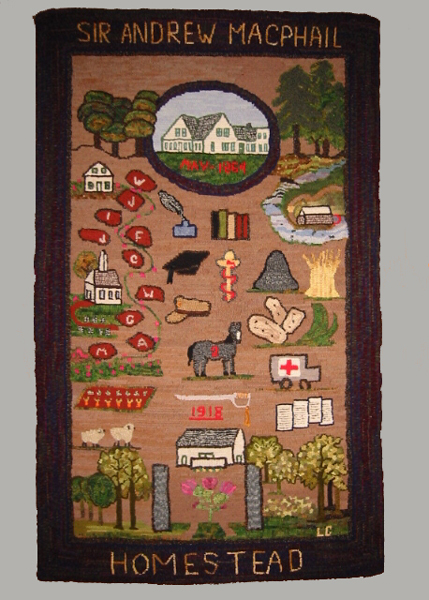 History of the Artefact:

Louse wrote a letter to the Macphail Homestead in 2002 "Inspiration to design and hook this 'Memory Rug' arose from stories told to me as a child by my grandmother, Catherine Macphail Martin, sister to Sir Andrew Macphail. I was captivated by her accounts of life at that time within her family and surrounding communities. My wish was to record these memories employing the traditional art of mat hooking. Both new and 'reclaimed' woollen fabrics were dyed or over dyed to obtain the desired colours.

The rug was completed in 2001." Legend for the mat is as follows: Oak Trees- representative of the 3 English oaks planted by Sir Andrews father William from stock brought to PEI by John Norton 1759-1830; Forested area with a stream on which was located a wood mill. There is a record of three mills which operated on this waterway- two gristmills and one wood mill. The stream is mentioned often in "The Masters Wife" written by Sir Andrew; Uigg School where Andrew's father taught, and where the early emphasis on academic excellence for each of the children was instilled; Valleyfield Church was an important element in the life of the MacDonaldite family; Dark Red Sandstones with initials of each of the Macphail children are entwined with roses. It is recorded that Catherine (the Master's Wife) had a passion for flowering vines and she planted and encouraged their growth on fences and outbuildings; vegetable garden and sheep, reflecting the self-sufficiency of the homestead. The root cellar would be stocked and wool spun, knitted or woven into articles for family use; the remaining symbols speak to the accomplishments of Sir Andrew and his love for his Island home; Inkwell and books reflect the importance of education instilled by the Master and his wife in each of the children (seven obtained University degrees of various kinds, arts, medicine, science- two attained a collegiate rank entitling them to teach school); Mortar Board, Forage Cap and Caduceus, Sir Andrew enjoyed many careers as a medical doctor, pathologist, professor of the History and Medicine at McGill and organized the first Canadian Field Ambulance Unit in France where he was Major in the Canadian Army; Agricultural Interests- Potatoes, with his brother James Alexander he conducted agricultural experiments on potatoes, tobacco and grain; Sword, Sir Andrew was knighted in 1918 by King George the 5th for his military and literary contributions; Horse He returned from England with a horse which he named Gypsy 2- Gypsy being the name of his mothers pony; Bell, the bell is a memorial to three generations of William Macphail's; Papers, Sir Andrew was also an essayist and a journalist. He was the first editor of the Canadian Medical Association Journal, which continues to be published. "The Masters Wife" portraying rural life and family values was a major work; The barn was used both for storage for carriages and farm equipment and also had a section with hardwood flooring for after-dinner dancing by invited guests. Today this barn is a Nature Center providing a valuable educational experience for PEI school children, very much in keeping with the high value placed on education by the Macphail family; Granite Pillars, at the base of the rug are two granite pillars, which are presently located at the original entrance to the homestead. They were transported from Montreal following a fire, which destroyed the MacDonald Engineering Building on the McGill campus in 1907; between the pillars is a Scottish thistle- an emblem of the heritage of Sir Andrew's grandfather who arrived from Scotland in 1833.