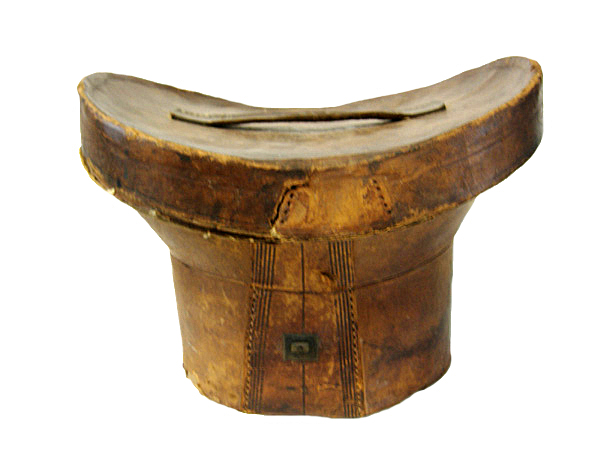 To See A Large Photo Please Click On The Image

This leather Hatbox would have been made to store a men's top hat that would probably been made from either beaver or silk. These hatboxes were often personalized with the owner name or initials stamped, or written, on the exterior of the box. It is said that the taller the top hat that a gentleman wore the wealthier he was.

Top hats started to take over from the tricorn hat at the end of the 18th century; a painting by Charles Vernet of 1796, Un Incroyable, shows a French dandy wearing such a hat.

The first silk top hat in England is credited to George Dunnage, a hatter from Middlesex, in 1793. Within twenty years top hats had become popular with all social classes, with even workmen wearing them. At that time those worn by members of the upper classes were usually made of felted beaver fur, while those worn by working men were made of rabbit fur; the generic name "stuff hat" was applied to hats made from fur. The hats became part of the uniforms worn by policemen and postmen (to give them the appearance of authority); since these people spent most of their time outdoors, their hats were topped with black oilcloth.