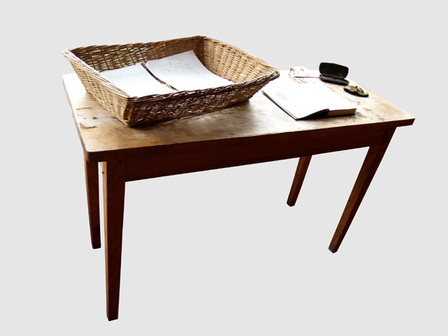 Sir Andrew Macphails writing desk where he wrote many of his books his best known, the masters wife was located on the second floor by a section of windows.  From this location he had a view of the backyard and trees.  He had it arranged that when mail came for him at the local post office, he had them raise a white flag which is could see from the second floor overlooking the trees.  He would then usually get his driver to drive him to the post office in the car.  He hired on a lot of students, more than he sometimes needed to help encourage them to get an education and support them in their efforts to do so, that is why he paid the students well compared to other jobs in the area.

After practising medicine and teaching at Bishop's University medical faculty in Montréal from 1893 to 1905, Macphail was appointed McGill's first professor of the history of medicine in 1907, a chair he occupied for 30 years. In 1911 he became founding editor of the monthly Canadian Medical Association Journal, a position he held until enlisting as a medical officer in WWI. Beginning in 1905 he published more than 10 books and scores of shorter pieces, most on nonmedical themes.

Many of his essays appeared in The University Magazine, an outstanding Canadian quarterly he edited from 1907-20, with the exception of his 4 years overseas. His particular concerns were to define the imperial connection between Canada and the UK, and to expose fallacies in, for example, feminism or modern education. He was knighted for his literary and military work on 2 Jan 1918. The book to which he devoted most care, and which he considered his best, The Master's Wife, a semi autobiographical reminiscence of Prince Edward Island.