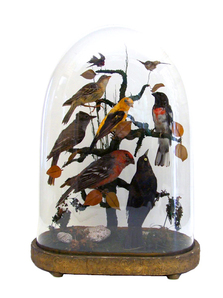 The Art of Taxidermy was a common practice in England during the eighteenth century and the glass bird displays were a popular item often found in the parlours of many Victorian homes.

This ornament on display in the parlour of the Bideford Parsonage Museum is relative to the time when Lucy Maud Montgomery lived at the Parsonage in 1894.

The popularity of domed taxidermy on display in the home can be credited to The Great Exhibition of 1851, in London, England. Although the earliest known pieces of taxidermy date from the beginning of the sixteenth century, the development and perfection of taxidermy techniques are intimately linked to Western Europe's fascination with the natural world through the eighteenth and nineteenth centuries.

From the late seventeenth century onwards, the improvement of taxidermy practices is inseparable from the scientific investigation of the natural world. What began as an essential practice for naturalists in their investigations of nature, became in the nineteenth century nothing sort of a fashion craze: in Europe, Britain, and North America the general public quite literally fell in love with nature whether it was alive or dead. Far from being a quaint hobby, the nineteenth-century passion for natural history changed the way people understood and interacted with nature. The love of nature was only increased with knowledge of its many and various parts and was therefore not incompatible with shooting, skinning, and displaying animals in museums, parlours, and even on hats.