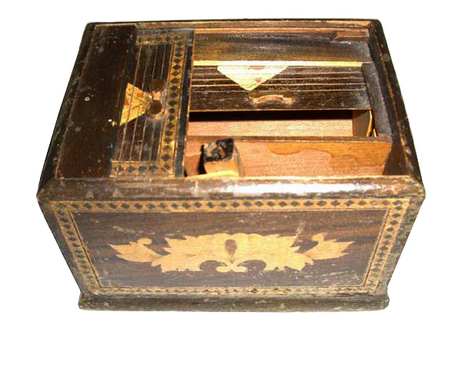 To See A Large Photo Please Click On The Image

The earliest know production date of this Cigarette Holder/Dispenser is around 1900.

This Cigarette Holder or Dispenser is made of wood and is rectangular in shape. Its entire surface is covered with multi-colored wood inlay. When the lid is opened, one cigarette is dispensed.

The earliest forms of cigarettes have been attested in Central America around the 9th century in the form of reeds and smoking tubes. The cigarette and cigar were the most common method of smoking in the Caribbean, Mexico and Central America until recent times. Cigarettes were largely unknown in the English speaking world before the Crimean War (1854-1856). The use of tobacco in a cigarette form became increasingly popular during the war. This was helped by the development of tobacco that was suitable for cigarette use. During WWI and WWII, cigarettes were rationed to soldiers.

Commercially manufactured cigarettes are seemingly simple objects consisting mainly of a tobacco blend, paper, and PVA glue (to bond the outer layer of paper together- a polyvinyl acetate), and often also a cellulose acetate-based filter. A typical tobacco blend may contain over 100 ingredients, many of them flavourants for the tobacco.

Even the most primitive form of smoking requires tools of some sort to perform. This has resulted in the staggering variety of smoking tools and paraphernalia from all over the world. Cigarette cases, cigar boxes, lighters, matchboxes, cigarette holders, ashtray, tobacco cutters, and dispensers are just a few.

To Learn more about the culture of smoking go to: